The answer is yes (though I am the writer of the piece that is linked, so take my answer with a grain of salt).

The number of novel mathematical objects encoded in the structure of one’s experience when under the influence of DMT is huge. Most mathematicians who try it will come out feeling that they “don’t even know where to start”.

Consider the “Chrysanthemum” level of DMT intoxication (which is the 2nd of 6 levels). Anybody who has read “The Symmetry of Things” by John H. Conway, Heidi Burgiel, and Chaim Goodman-Strauss (or who has a deep acquaintance with symmetry groups by other means) will *readily recognize* the fact that the symmetry groups that appear on such DMT visuals are *not Euclidean*.

At that level they would see rapidly-flickering superpositions of hyperbolic symmetry groups like *2 3 11, *2 3 7, 2 4 5, 2 3 9 (the picture below), etc. Together with the fact that these visuals are completely “flat-looking” rather than curved, this is the smoking gun that what you are looking at/experiencing is a hyperbolic phenomenal space. 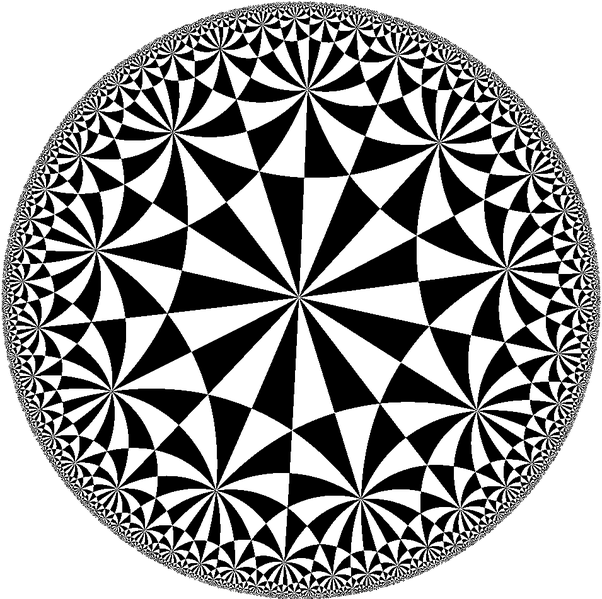 And this is not even discussing the 3D hyperbolic space that becomes apparent (if you know what to look for) on higher levels of DMT. For instance, on level 3 you can experience 3D Euclidean symmetry groups tesselate your visual field, on level 4 you can experience 3D hyperbolic space and “prime” objects that belong to that geometry (which are impossible to reproduce faithfully in Euclidean space). Level 5 leads to global topological bifurcations of the phenomenal space, which gives rise to even more exotic objects with hard-to-grasp mathematics. And level 6… well, there IS a level 6, and that’s as much as I’m willing to say for the time being.

In future, I believe that mathematicians who care to *look closely* will see the signature of exotic mathematical spaces on the “DMT Realms” everywhere. This will become common knowledge in both neuroscience and mathematical circles.

As David Pearce likes to say: “Some people think we are reaching the age where fundamental knowledge has been achieved… I think the enterprise of knowledge has scarcely begun.” Studying exotic states of consciousness is not even at a pre-Galilean stage, it perhaps is even at a pre-Socratic stage. Alas, if more people pay attention and document their experiences carefully, such that a critical mass of rational brilliant psychonauts is reached, there will be a “knowledge explosion”.

For more see: The Hyperbolic Geometry of DMT Experiences: Symmetries, Sheets, and Saddled Scenes (cf. Explain Like I’m 5 version), and How do you conceptualize the entities many individuals describe encountering when they’ve consumed DMT?